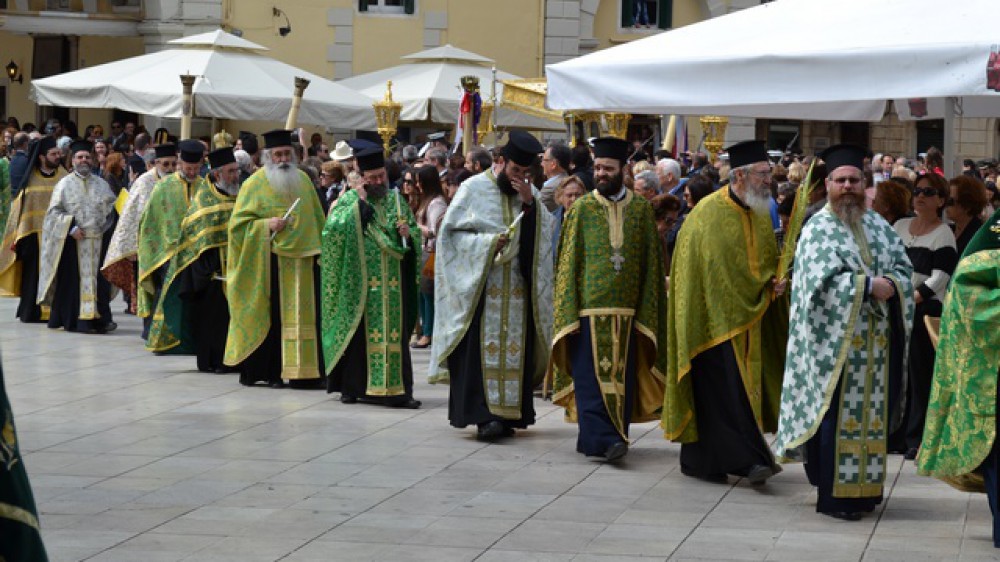 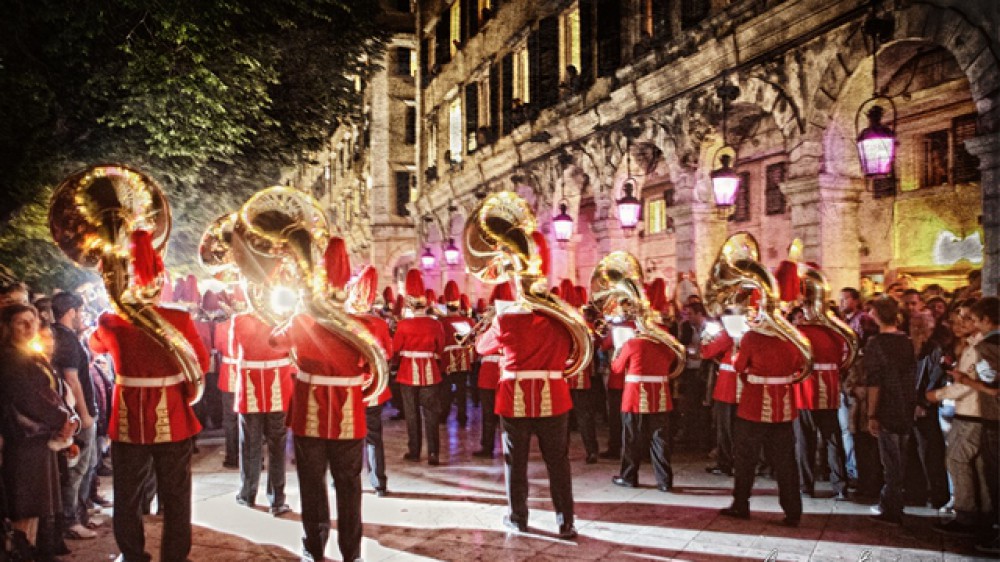 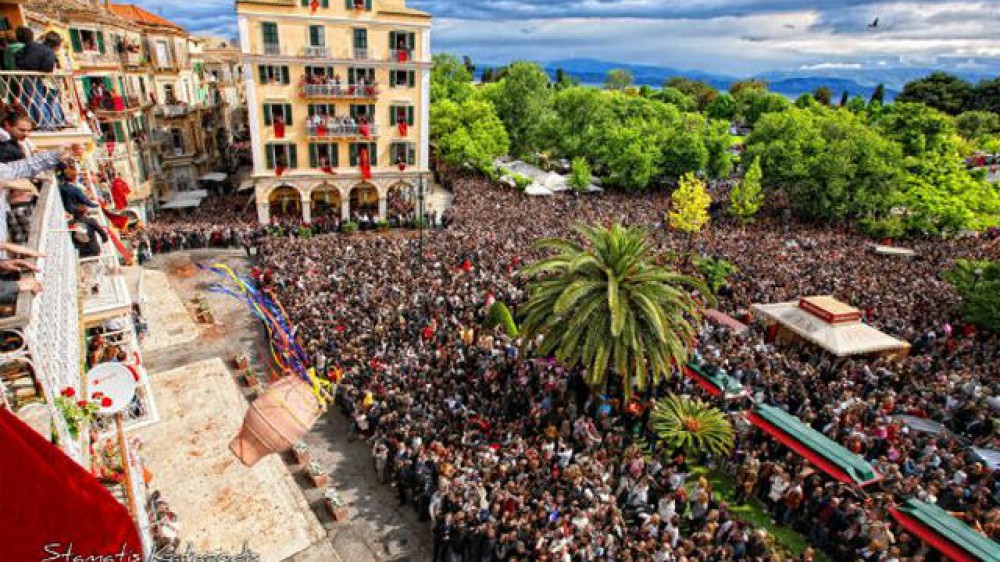 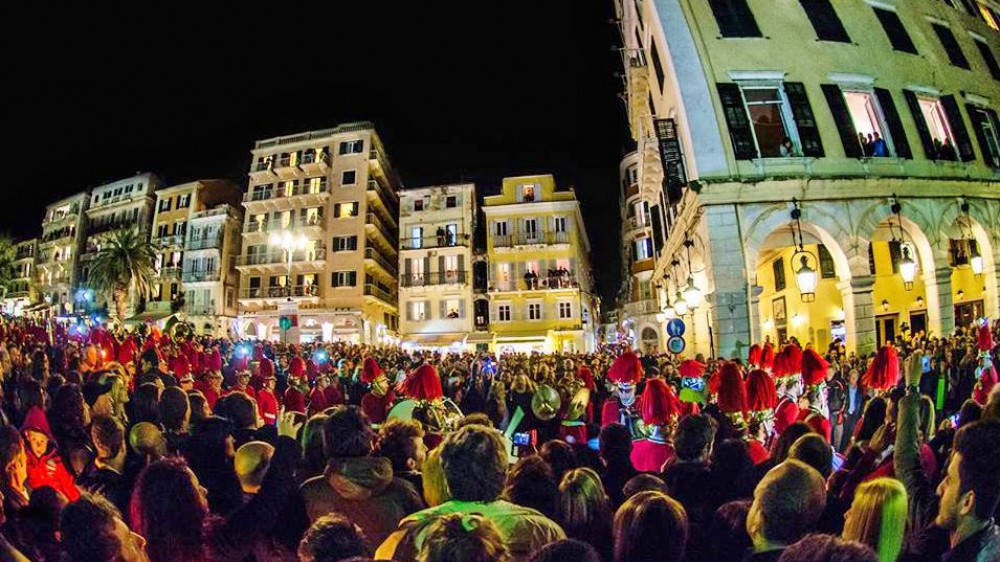 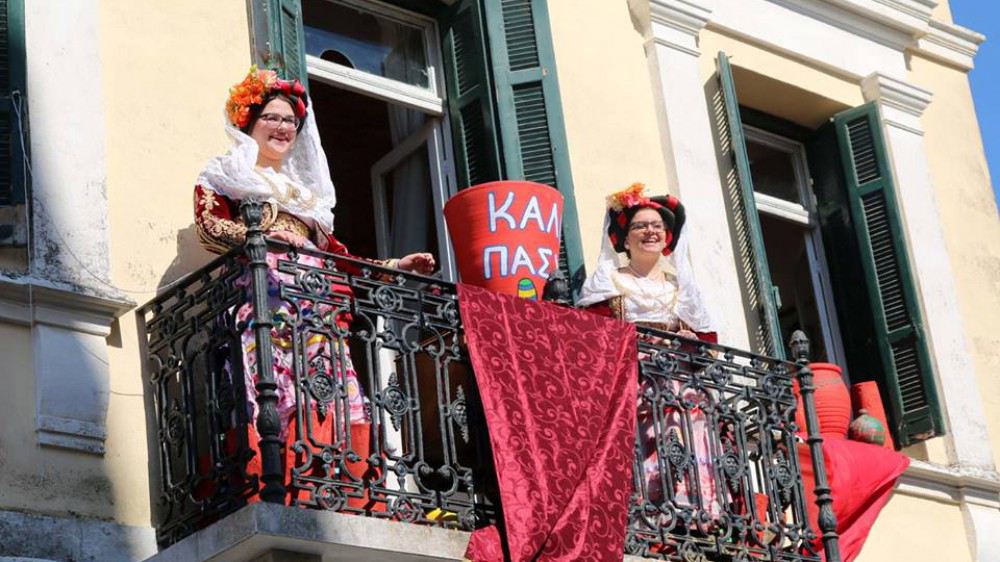 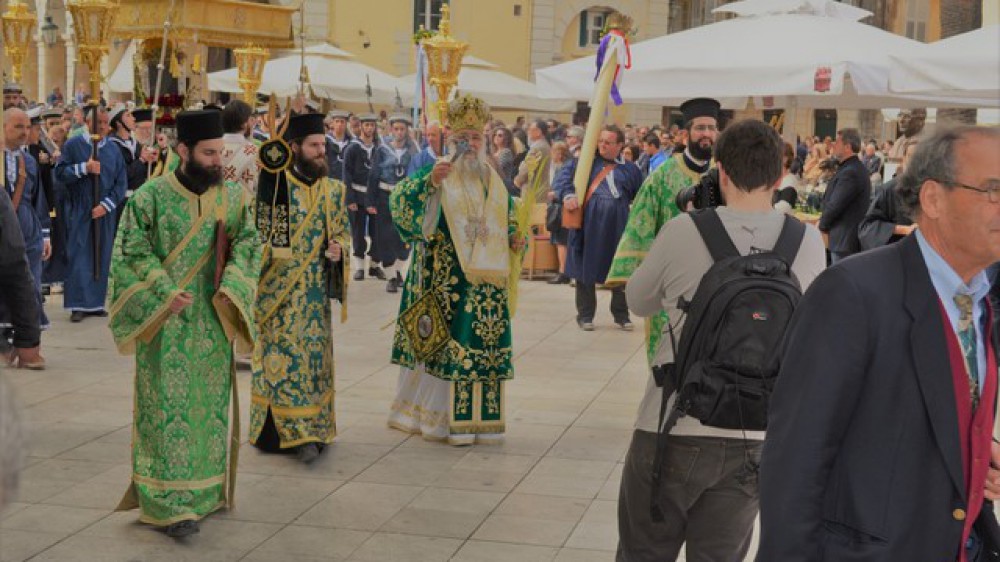 Below we will deal with the biggest event of the year, held each year in Corfu with a glory and splendour not seen anywhere else in the world, Corfu Easter, a huge celebration bringing thousands of visitors each year to the island gains in momentum for 10 days leading up to the great Resurrection Mass itself.

Easter, the biggest festival of the Orthodox church, in Corfu is even greater, more devout, more spectacular, more impressive, and has rituals that are found nowhere else, it is a special event and a great reason to visit Corfu during spring.

Palm Sunday
The ‘prologue’ is on Palm Sunday when a procession of Saint Spyridon takes place to celebrate the tradition which says that the Saint freed the island of a deadly plague which hit Corfu in 1629.  The procession has been held since 1630 and all the bands of the island participate, not many, only 18!The same day in the evening there is a concert by the Philharmonic Society “Mantzaros” at the Municipal Theatre.

Holy Thursday
Holy Thursday is the day in which the red eggs are painted and the Twelve Gospel readings are made in all churches, but in the Roman Catholic cathedral (the “Duomo” of the Town Hall Square), i place something unique takes place, there are twelve lit candles and each one is erased at the end of every reading.
Despite the difference in calendar, in Corfu the Catholic church participates in all events of the Orthodox Church and celebrate together, having arranged papal dispensation for this, as otherwise families and communities would be divided.

Good Friday
The epitaph processions of Good Friday in Corfu have different colour,  and follow a ritual that makes the event even more impressive. Processions of Epitaphs come out from every church and all intersect at the centre of town.
From the church of Panagia Spileotissa at New Fortress comes out the first procession, followed at the same time by the epitaph of the temple of Pantokrator in Kampiello area, then all the others follow, ending with the most magnificent of all, the epitaph of the Mitropolis, which comes out after 10 pm, accompanied by a philharmonic orchestra, and Venetian style lights (Manualia the local name) on the Liston are shrouded in purple as a sign of mourning.  The choir and thousands of believers hold the lit candles high, these are called “tortses” here.

The procession follows a specific route, from the Cathedral it climbs the walls of Arseniou street and going through the gate of the palace arrives at the Esplanade and from there to the historic city centre.
Throughout the journey thousands of lit candles are located on roadsides indicating its path.

The three main bands of the city accompany it all the way playing. each one a different song, the red is the “Old” Band playing the Adagio of Albinoni, the blue band which is called “Mantzaros” is playing the Marcia Funebre by G. Verdi, and the band “Kapodistrias” plays the Elegia Funebre, the Sventura Mariani and the funeral march of Chopin.

Great Saturday
The events and rites of Holy Saturday are perhaps the best moments of Easter in Corfu, starting at 6 o`clock in the morning in the church of “Madonna of foreigners” when the artificial “earthquake” is created to represent the earthquake during the resurrection, according to the Holy Bible .
Later, the procession of the Epitaph of the church of Saint Spiridon takes place at his church.  This is a custom begun in the era of Venetian rule when the Venetians for security reasons forbade the public epitaph processions, so they then took place inside the churches.  At the same time another procession, of the relics of St. Spyridon, takes place, this time commemorating the deliverance of the island from famine.

The ever present bands of the city play funeral tunes such as ‘Amleto’.

And suddenly the mood changes within a few minutes from the mourning of the epitaph to the joy of the first Easter which here happens at 11:00 a.m in the morning of Saturday.

This is the custom that all guests and locals are waiting for and which only happens here, from all the balconies in every home of the island residents throw in the streets large clay pitchers, many filled with water, and at the same time all the church bells peal joyfully especially at the central point near the Liston,   the most crowded place and the real centre of this custom.

The origin of the custom, which lasts for several minutes, is not entirely clear, one theory says that it has its roots in the time Venetian rule when people used to threw their old things away at new year in the hope that the coming year will bring them better and newer replacemenrs.
Another theory says that in ancient Greece people threw away their old pitchers in April, to fill the new ones with fresh fruits, celebrating this way the beginning of the farming season.  Whatever the origin is the noisy Corfiots  have adopted the custom and every year they try to find ways to make it last longer, and louder.

And finally the time that everybody is waiting for is reached, the hour of resurrection. The most spectacular Resurrection Mass is in the bandstand on the Upper Esplanade in Corfu Town, but each village has its ceremonies, beginning in church and ending out of doors, depending on the weather, and all wonderful to witness.

Easter Sunday
The Resurrection service takes place outside, in the bandstand of the Upper Spianada Square officiated by the Bishop involving all major municipal figures, many bands and thousands of people.

The vast Square is packed with people,the palace, fort and old buildings which fringe itaster in Corfu-2 help to create the unique atmosphere, and when the Bishop chants “the Risen Christ”, the explosion of hundreds of exciting fireworks will be an experience that nobody can ever forget. The party continues all night with soup that here has a special name called “tsilichourda”, plenty of wine, Easter cakes called “Fogatsa” or “doves” and clubbing until the morning.

On Easter Sunday in every church there is a procession of the Resurrection, the bands of course have their place of honour.
The site of hundreds of lamb on the spit, was not included in the original customs and tradition of Corfu, where the tradition here for Easter lunch was the egg and lemon soup (avgolemono) plus 2-3 types of meat, and they used to grill the lamb on the second day of Easter, this has been changed in recent years however and now everyone roasts the lamb on a large spit, often accompanied by the kokoretsi on a smaller one below it.

Following more celebrations on Sunday afternoon there are processions of icons and relics in different parts of the island almost daily until the following Sunday.